Publicly or secretly banning people, in this case on Twitter, Facebook, YouTube, etc. is a common practice and one of the first signs of a very settled  Communist regime. What can anyone expect when this parasitic society continues to allow these criminals advance their agenda? Can we do anything at this point? We doubt it. Our own White House is filled with Mossad and KGB agents and so are most of the governments around the world. Either you do and say what ‘they’ want or you go nowhere! Why would Alex Jones want to speak out against this, when he himself is an agent of those he is accusing of wrong doing? The level of hypocrisy the world is immersed in is unreal. Psychological Warfare is the name of the game. It is ‘silent’ terrorism and ZionistReport.com can clearly claim to be one of the many victims of this “Shadow Banning” which is described in the video below. Remember, the tribe always works ‘behind the scenes’.

Indeed it is time to step things up. Time is against us, because more control will be imposed on us as the elite get closer to the complete fulfillment of their evil agenda. We MUST spread the truth as much as we can NOW. Think of all the good sites that have been shut down by Facebook? Of the people who are being ‘punished’ for exposing truths? We have personally experienced how they have banned videos that we posted and even our access to posting on Facebook! So, James Corbett is right, we cannot just sit around hoping things get better, we must TAKE ACTION. Until you realize that it is OUR responsibility no one else’s, nothing will change.

This video is banned from re-uploading on YouTube. While this is meant to come off as comedy, it simply doesn’t. Besides from the obvious here, take a moment and think if the situation was reversed. There would be cries of “Anti-Semitism” and “racism” everywhere!

(((Jonah Peretti))), the founder and CEO of Buzzfeed, surely thinks it is fine to mock Christian goyim.
https://www.buzzfeed.com/about/team
Please let their comment section know your disdain for this video:
https://www.youtube.com/watch?v=B3JFSL8AA70

This is a must watch video!! And, it is one of the best out there we have seen in some time, that exposes many on a high-level — Lauren Southern in particular.

We can say that this is 100% true because it just happened to us. We had two videos about Las Vegas False Flag Shooting removed by the YouTube tribe and we received one strike on our YouTube channel. None of these videos were created by us, simply reposted. WE NEED TO START BOYCOTTING YOUTUBE, as soon as possible. What kind of world are we allowing these Jews to create for us?

YouTube has changed its secretive search algorithms in response to the spread of conspiracy theory videos about the mass shooting in Las Vegas.
The home-video behemoth came under fire in the wake of the shooting, when several unsubstantiated claims made their way into the top new results about the massacre. Videos such as “Proof Las Vegas Shooting Was a FALSE FLAG attack—Shooter on 4th Floor” made it into the “Top News” section on Tuesday, just two days after the shooting occurred, according to the Wall St Journal.
But YouTube has since changed its search algorithms to promote more reputable news, a source close to the company told The Independent. The changes had been planned for months, the source added but were moved up in the wake of the shooting.
By Friday, the top ten results for “Las Vegas shooting” all came from news outlets or contained direct uploads of footage from the event.
But the company is still working on its “Up Next” feature, which suggests related content to watch at the end of a video, according to the Journal. On Friday, watching a video titled “Las Vegas Shooting: 6 QUESTIONS – False Flag? Multiple Shooters? Paddock patsy?” lead to suggested videos like “A False Flag Patsy Event Is Unfolding Before Our Eyes” and “CNN Crisis Actor Caught Red Handed”. 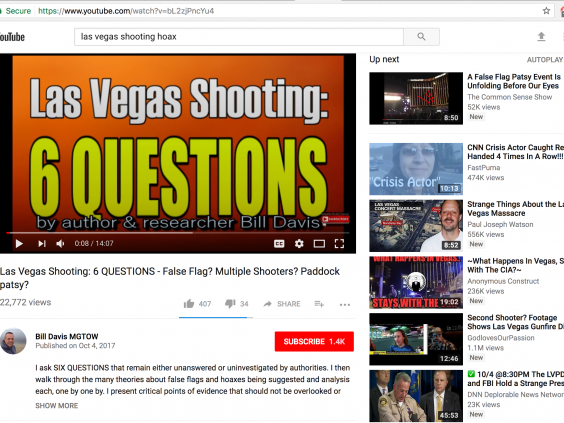 YouTube uses secret algorithms to determine which videos appear in its “Top News” and “Up Next” section. The company has said publicly that it factors in a video’s popularity and a user’s history when choosing which videos to display but has declined to reveal more.

The company says it regularly deletes videos flagged for violating its community guidelines. These guidelines cover everything from nudity to child endangerment but do not discuss conspiracy theories or unverifiable claims. YouTube declined to provide details to The Independent on its standards regarding conspiracy theories.

The company told the Guardian, however, that a video called “Las Vegas ‘Shooting’ … Did It Actually Happen?” did not violate its standards. The video – which questions whether the shooting was “faked” by paid actors – had amassed almost 350,000 views by Friday morning.

The company did pull the aforementioned video calling the shooting a “false flag attack,” however. YouTube also gave the creator’s account a penalty strike.Accounts that receive more than three strikes are terminated.

The video’s creator, Jake Morphonios, claimed the clip garnered 2.5m views before it was deleted. He pushed back against the video’s deletion, saying he was simply offering an opinion.

“I’m not presenting myself as mainstream media,” Mr. Morphonios told the Journal. “I’m just a guy with a computer offering an opinion. And to be punished for that is, well, it’s draconian.”

Welcome to the new Soviet Union that now rules the entire planet. The new YouTube ‘policies’ mean that soon those who own a channel and use it to expose FACTS will be considered ‘terrorists’. Unless we post what the tribe wants, we will be in trouble, and we cannot hide our identity because they know how to find us. In the new Amerika those who dare to expose truths will be gulag candidates.

YouTube announced Tuesday that it will be taking steps to suppress videos deemed “controversial” by placing them in a “limited state,” even if they do not violate the site’s policies, according to an official blog post by YouTube.

According to the blog, YouTube will be disabling comments and monetization for videos that don’t but are flagged by users for “hate speech,” regardless of whether they break YouTube’s content rules:

We’ll soon be applying tougher treatment to videos that aren’t illegal but have been flagged by users as potential violations of our policies on hate speech and violent extremism. If we find that these videos don’t violate our policies but contain controversial religious or supremacist content, they will be placed in a limited state. The videos will remain on YouTube behind an interstitial, won’t be recommended, won’t be monetized, and won’t have key features including comments, suggested videos, and likes.

YouTube stated that it will be using a “trusted flagger” coalition to advise on what content should be relegated to the shadows and what is and isn’t hate speech. The coalition will include groups that have been accused of or exhibited leftist biases in the past such as the Anti-Defamation League, the No Hate Speech Movement, and the Institute for Strategic Dialogue.

The site also revealed that it will alter search results so that any time a topic pertaining to “sensitive keywords” is typed into the search bar, users will be “redirected” to a playlist of YouTube curated content that “directly confront and debunk violent extremist messages.”

These videos will often time be featured from the list of YouTube’s “Creators for Change” video makers, whom YouTube describes as creators “tackling social issues and promoting awareness, tolerance and empathy” in their videos. This list of creators features noted social justice advocates, such as Franchesca Ramsey.

“If a video doesn’t break YouTube’s terms of services then they absolutely SHOULD NOT be attempting to dampen the reach of the video any further,” Annand “Bunty King” Virk told The Daily Caller. “Who determines what’s passable and what isn’t? At what point do we finally realize that saying the right thing isn’t always about saying what people want to hear?”

“By these standards, if YouTube existed previous to the Emancipation Act, they’d be censoring videos criticizing slave owners, since being anti-slavery wasn’t popular … at all,” Virk said. “The popular opinion isn’t always the right opinion.”

YouTube did not define what constitutes “hate speech” or terrorist or supremacist messages. These nebulous terms, in conjunction with help from leftist organizations and content creators, have given rise to questions about the future of thought diversity on the platform.

“I do not trust their ability [to automatically flag extremist content],” content creator Matt Jarbo told the Daily Caller. “I think they have an algorithm in place to help combat those issues, but it’s not narrow enough to not impact the skeptical/anti-SJW content.”

In the past, YouTube has censored videos from conservative groups such as Prager U for videos that denounced Islamic terrorism as “hate speech.” Last year, YouTube placed Prager U videos in the “restricted” column, alongside videos with sexual content and adult themes, despite the channel containing nothing lewd or explicit in their videos.

This video demonstrates the how the Tribe has no regard for Christians. What is sick is how they twist this disregard and hate into comedy for the very people [the Goyim] whom they insult!

However, when the tables are turned, when they get a taste of their own medicine, what happens? Well, they shut it down. Just more “do what I say, and not what I do” from the “Chosen People.” It also goes beyond the hypocrisy of censorship, and that they can do whatever they want. The fact that they so flagrantly mocking Christ is evil. Who hates Christ? SATAN, no other religion consistently mocks Christ or the Virgin as Judaism.

This is our first video we put together — let us know your thoughts! Thank you for your support!

This video is banned on YouTube — when you watch it, you will see why. We are all being brainwashed on a daily basis. Trump is a nothing less than a traitor and part of the game. Jerusalem will be the capital of the Anti-Christ. It is happening right before our very eyes.