When you talk about conspiracy the sheeple look surprised, but then you see how every year Bilderberg is on the ‘news’. We wonder what the Goy ‘think’ if anything when they read about it. Or is it that they are so brainwashed that they enjoy having their lives ruled by their evil masters. Meanwhile, humanity continues on the path of self-destruction. (Please also read the second article on AI).

With AI high on the agenda, Demis Hassabis, who runs Google’s DeepMind project, has been invited back. Photograph: Lee Jin-man/AP

This year’s Bilderberg conference has begun in Turin, and as well as billionaires and bank bosses the attendees include four prime ministers, two deputy prime ministers, the Nato secretary general, the German defense minister, the king of the Netherlands and the indefatigable 95-year-old Henry Kissinger.

Like Kissinger, Bilderberg shows no signs of slowing down or complacency. Its recent flirtation with artificial intelligence and Silicon Valley seems to have blossomed into a full-blown affair. This year a Twitter board member, Patrick Pichette, has got the nod, and returning for the second time is Divesh Makan, who has links to Mark Zuckerberg and whose clients include Reid Hoffman, the LinkedIn co-founder, and Bilderberg veteran.

With AI high on the agenda, Demis Hassabis, who runs Google’s London-based DeepMind project, has also been invited back. He will be joined by his fellow AI luminary Hartmut Neven, the head of Google’s Quantum Artificial Intelligence lab.

It means the conference has both a futuristic feel and a nostalgic air, with “quantum computing” on the agenda alongside “US world leadership” and “Russia”. So even as Bilderberg races into a bio-integrated smart future, there is a simultaneous resurgence of one of the group’s traditional power cliques: big oil. Royal Dutch Shell is represented in Turin by its chief executive, Ben van Beurden, and the French oil and gas giant Total has sent its chairman and chief executive, Patrick Pouyanné, who will be welcomed to the conference by the Bilderberg insider and Total board member Patricia Barbizet.

Sitting alongside Barbizet on Bilderberg’s steering committee is the BP director Sir John Sawers. The former head of MI6 has this year invited BP’s chief financial officer, Brian Gilvary, who can chat about fracking with Dambisa Moyo, a director at Chevron.

The veins of Bilderberg run with oil, and its beating heart is the Dutch royal family and its oil interests. The founding president of the group was Prince Bernhard, the grandfather of the current king, Willem-Alexander. In his inaugural speech at the first conference in 1954, Bernhard set out the purpose of Bilderberg: “Because the free countries of Europe, the United States and Canada must act as a unit, they must try to think the same way. This is a long-term process.”

Out of this consensus emerged the EU, for decades nurtured around the Bilderberg conference table. And yet now, as they stand on the brink of a brave new algorithmic age, everything they have worked so hard to achieve is under threat.

At the top of the conference, agenda are the dire words: “Populism in Europe.” The EU, already given a black eye by Brexit, is facing another thumping from Italy’s populist coalition, and the transatlantic alliance is groaning under the strain of Trump. Which is why Turin is the perfect choice for the 2018 summit.

The city is the spiritual home of Fiat and the Agnellis: the flamboyant Gianni Agnelli was a mainstay of Bilderberg throughout the last few decades of the 20th century, and a close friend of Kissinger (not, in this instance, a euphemism). His grandson, John Elkann, runs Exor, the holding company for the Agnelli billions, and sits on Bilderberg’s steering committee.

Agnelli attended 37 conferences: his spirit will loom large over the Turin gathering, which is being held at the old Fiat HQ. It offers a chance for Bilderberg to reflect on its past, remember its victories and gather courage so that it can hurl itself back into the battle for globalization.

Also at the conference will be George Osborne, who was recently given a job at Exor, chairing a council of business advisers. The Evening Standard editor has recently been criticised for allegedly selling positive news coverage to big business. Is Osborne going to be inking some juicy cash-for-content deals in Turin? Or might he grit his teeth and report on what is discussed?

Of course, Osborne is not the only representative of the media at Turin. In fact, it is a bumper year for journalists: there are columnists, editors, TV anchors, from the editor-in-chief of Bloomberg to the president of Turner International. Elkann is on the board of the Economist Group (Exor has the majority share).

Scratch an industrialist at Bilderberg and you will find a media magnate. Antti Herlin, the Finnish delegate who runs Kone Corporation – “a global leader in the elevator and escalator industry” – also happens to be the vice-chair of the company that owns the daily newspaper Helsingin Sanomat.

And yet with all these media representatives, we will learn little of what is said in Turin.

“It’s too late to give machines ethics, they’re already beyond our control,” Source:
theguardian.com
Stephen Hawking, Bill Gates and now Demis Hassabis of Google’s DeepMind have all warned of the dangers of artificial intelligence (AI), urging that we put ethical controls in place before it’s too late.
But they have all mistaken the threat: the AI we have let loose is already evolving for its own benefit.
It’s easy to imagine that humans will build ever more clever computers; machines that will end up smarter than we are. Once they pass this point and achieve “superintelligence”, whether trapped inside boxes or installed in roving robots, they can either help or turn against us. To avoid this nightmare, the Oxford philosopher Nick Bostrom says we must instil the superintelligence with goals that are compatible with our own survival and wellbeing.
Hassabis, too, talks about getting “a better understanding of how these goal systems should be built, what values should the machines have”. They may not be dealing with threatening robots, but they are still talking about actual “machines” having values.

But this is not where the threat lies. The fact is that all intelligence emerges in highly interconnected information processing systems; and through the internet, we are providing just such a system in which a new kind of intelligence can evolve.

Our future role in this machine? We might be like the humble mitochondrion, which supplies energy to our body’s cells

This way of looking at AI rests on the principle of universal Darwinism – the idea that whenever information (a replicator) is copied, with variation and selection, a new evolutionary process begins. The first successful replicator on earth was genes. Their evolution produced all living things, including animals, whose intelligence emerged from brains consisting of interconnected neurons. The second replicator was memes, let loose when humans began to imitate each other. Imitation may seem a trivial ability, but it is very far from that. An animal that can imitate another brings a new level of evolution into being because habits, skills, stories and technologies (memes) are copied, varied and selected. Our brains had to quickly expand to handle the rapidly evolving memes, leading to a new kind of emergent intelligence.

The third replicator is, I suggest, already here, but we are not seeing its true nature. We have built machines that can copy, combine, vary and select enormous quantities of information with high fidelity far beyond the capacity of the human brain. With all these three essential processes in place, this information must now evolve.

Google is a prime example. Google consults countless sources to select material copied from servers all over the world almost instantly. We may think we are still in control because humans designed the software and we put in the search terms, but other software can use Google too, copying the selected information before passing it on to yet others. Some programs can take parts of other programs and mix them up in new ways. Just as in biological evolution, most new variants will fizzle out, but if any arise that are successful at getting themselves copied, by whatever means, they will spread through the wonderfully interconnected systems of machines that we have made.

Replicators are selfish by nature. They get copied whenever and however they can, regardless of the consequences for us, for other species or for our planet. You cannot give human values to a massive system of evolving information based on machinery that is being expanded and improved every day. They do not care because they cannot care.

I refer to this third replicator as techno-memes, or temes, and I believe they are already evolving way beyond our control. Human intelligence emerged from biological brains with billions of interconnected neurons. AI is emerging in the gazillions of interconnections we have provided through our computers, servers, phones, tablets and every other piece of machinery that copies, varies and selects an ever-increasing amount of information. The scale of this new evolution is almost incomparably greater.

Hassabis urges us to debate the ethics of AI “now, decades before there’s anything that’s actually of any potential consequence or power that we need to worry about, so we have the answers in place well ahead of time”. I say we need to worry right now and worry about the right things. AI is already evolving for its own benefit – not ours. That’s just Darwinism in action. 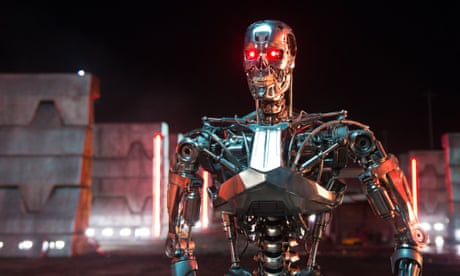 At the moment we create most of the temes out there – uploading photos, videos, and blog posts, sending emails, and creating web pages. And we demand ever more hardware to handle it all. The danger comes, and may already have come, when much of the software and data are evolving on their own. We wouldn’t even know this was happening until we found we were building ever more machines without getting the expected increases in capacity.

Could such a system become artificially intelligent? Given that the natural intelligence we know about emerged from highly interconnected evolving systems, it seems likely if not inevitable. This system is now busy acquiring the equivalent of eyes and ears in the millions of CCTV cameras, listening devices and drones that we are happily supplying. We do all this so willingly, apparently oblivious to the evolutionary implications.

So what might we expect of our future role in this vast machine? We might be like the humble mitochondrion, which supplies energy to all our body’s cells. Mitochondria were once free-living bacteria that became absorbed into larger cells in the process known as endosymbiosis; a deal that benefited both sides.

As we continue to supply the great teme machine with all it needs to grow could we end up like this, willingly going on feeding it because we cannot give up all the digital goodies we have become used to?

It’s not a superintelligent machine that we should worry about but the hardware, software and data we willingly add to every day.

Previous How This Jewish Doctor Became An Agent For Qatar
Next VIDEO: The Catholic Restoration – Chartres Pilgrimage 2018
NameE-mailWebsiteComment