Only the very gullible and ignorant still believe that peace has ever been in the cards for Israhell. The vicious, cynical, criminal tribe has never thought of peace as an option, instead, they have played the game long enough and now, its time to finally finish up with the Muslims, and the move of the US embassy from Tel Aviv to Jerusalem, might just come in handy to incite more chaos with Arabs around the world. Isn’t chaos what they always use to expand their tentacles? Zionist traitor, Trump has been announcing the embassy move which he knows will without a doubt lead to more international violence. Will he do it next week or next month? We don’t know for sure, but one thing is certain, he will do it when the time is right in order to get the expected reaction.

Fireworks from the Mount Herzl ceremony seen over the Knesset in Jerusalem, marking the beginning of celebrations of Israeli 69th Independence Day, on May 1, 2017. (Yonatan Sindel/Flash90)

“The American recognition of Jerusalem as the capital of Israel destroys the peace process,” Abbas’s spokesman Nabil Abu Rudeineh said in a statement to AFP.

“The American recognition of Jerusalem as Israel’s capital and moving the American embassy to Jerusalem involves the same level of danger to the future of the peace process and pushes the region into instability,” he said.

The warning comes as Trump is due to decide by Monday on whether to move his country’s embassy from Tel Aviv to the disputed holy city.

Reports emerged on Friday that Trump could again delay moving the embassy but recognize Jerusalem as the capital of Israel.

The Palestinians see East Jerusalem as the capital of their future state and fiercely oppose any changes that could be regarded as legitimizing Israel’s control over East Jerusalem, which it captured in the 1967 Six Day War.

Without referring to Trump by name, Abu Rudeineh said any just solution in the Middle East required recognition of East Jerusalem as the capital of an independent Palestinian state.

“East Jerusalem, with its holy places, is the beginning and the end of any solution and any project that saves the region from destruction,” he said in an earlier statement on the official Wafa news agency.

Israel annexed East Jerusalem and claims all of Jerusalem as its undivided eternal capital. 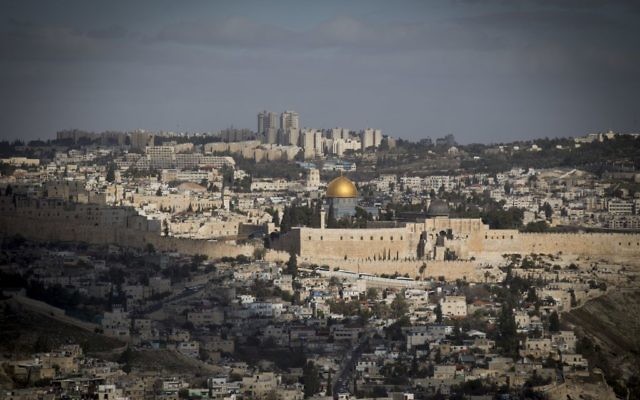 View of Jerusalem showing the Old City in the foreground against new parts of the city in the background, January 9, 2017. (Yonatan Sindel/Flash90)

This has not been recognized by the international community. No countries currently have their embassies in Jerusalem, instead keeping them in the Israeli commercial capital Tel Aviv.

Trump is due to decide by Monday on whether to renew a six-month waiver on moving the embassy. He pledged during his campaign to move the embassy to Jerusalem but renewed the waiver in May.

Any major shift in US policy would make that goal more difficult to achieve, Middle East analysts say.