Here we have rt.com (Russian State-owned channel) salivating over the slow destruction of Europe. They have been infiltrating and brainwashing for centuries and finally seeing the results of their evil work. It’s funny to see how in this article they state the fact that Catalonia went against the law when it tried to claim independence from Spain when in other articles they have been accusing the Spanish Government of being ‘authoritarian’ and ‘oppressive’ for applying the law. Their propaganda is so obvious it is revolting.

The ONLY way out for Europe is for European countries to leave the EU as soon as possible because it is a trap. Let’s stop the daily brainwashing by helping educate as many people as we possibly can.

Veneto and Lombardy, the two wealthiest regions of Italy, are voting today in a bid for greater autonomy from the center. While non-binding, the twin referenda send a strong message to Rome after the landmark independence vote in Catalonia.
Veneto and Lombardy voters are to decide on Sunday whether to grant regional authorities more control over their taxes, administration, immigration, and infrastructure. 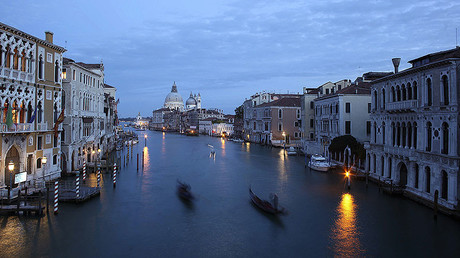 Polling stations are open from 7 am to 11 am on Sunday, with results expected to be counted late into the night, the local press reports. Over 12 million of citizens will be offered a choice of voting ‘yes’, ‘no’ or ‘blank’ by tapping the screen of a tablet fitted to a polling booth, according to La Repubblica newspaper. Voting from abroad is not allowed.

The results of the referenda are legally non-binding even if the majority of people in both regions vote ‘yes’ to greater autonomy. It is however thought that they will help Veneto and Lombardy – governed by the euroskeptic,  anti-immigrant Northern League right-wing party – have more leverage in negotiations with Rome.

Roberto Maroni, the president of Lombardy and a top-tier member of the Northern League which spearheaded the plebiscites, says that if the ‘yes’ vote prevails on Sunday, he would hope to start negotiations on greater autonomy immediately, La Repubblica reported.

“The more people vote, the greater bargaining power I will have,” Maroni told the New York Times (NYT) in early October. If regional authorities manage to claw back more powers from Rome, it will have to be set out in a law and be approved by an absolute majority in Italy’s parliament, according to Corriere della Serra.

However, the turnout is projected to be lower than needed to declare the plebiscite valid. Though 69 percent of voters would say ‘yes’ – compared to 31 percent of ‘no’ votes – the turnout is expected to be 42 percent at most, compared with 43 percent of possible abstentions across both regions combined, according to an October poll by consulting firm Lorien.

In part, the twin vote has been inspired by the wave of autonomy referenda that has rocked Europe over the past few years, including Scotland in 2014, the whole UK last year and Catalonia in late September.

“Like the Catalans, we have decided to give voice to the people,” Maroni told NYT. “The difference is that what we ask for is allowed by the Italian Constitution.”

Also, there are other precedents at home. Some of Italy’s regions – Sardinia, Sicily and the partly German-speaking Trentino-South Tyrol – have been given a high degree of autonomy from central government under the Italian constitution.

Neither Veneto nor Lombardy is asking people to consider de-facto independence from Italy, in sharp contrast with Catalonia, where local leaders are determined to prevail in their wrestling match with Madrid. Also in contrast to Catalans, people in Veneto and Lombardy lack a distinct culture and officially-recognized language, thereby having a weaker claim to their own national identity, despite regional dialects which people from elsewhere in Italy struggle to understand.

This is not to say that Veneto, home to tourist mecca Venice, and Lombardy, home to Milan, Italy’s capital of fashion and finance, do not have a distinguished history of independence. Venice, for instance, was an independent monarchy until the second half of the 19th century. Even after annexation by Napoleon, Veneto did not join the rest of Italy until 1866, five years after the national unification.