What more proof do people need to see that Russia is the hub of Judaism? Putin has called for Jews to move to Russia where they are welcomed. Why? Because Putin is one of them, and he is very close to comrade Netanyahu. This article provides us with more proof on how Russia is cozying up to Israel and getting ready to rule the world from the New Soviet Union. The article also represents more destructive propaganda, indirectly pointing their finger at the so-called ‘western anti-Semitism’, which was created by them, as a political tool to divide and conquer the west. Didn’t they use the same tool accusing Germany of anti-Semite that resulted in WWII? What makes people think they will not use it again? The lie continues!

The head of Russia’s Federation of Jewish Communities has told reporters that over the past years manifestations of anti-Semitism in the country have been at a minimal level and boiled down to day-to-day cases.

“As far as Russia is concerned, here we have mainly day-to-day anti-Semitism and even this is on a minimal level,” Aleksandr Boroda said in an interview with Interfax.

He added that radical groups with extremist views existed everywhere in the world, including the United States, and that the current situation in European countries had prompted many European Jews to seek repatriation to Israel.

Boroda told reporters that, outside of Israel, the Jewish population in Russia of about 1 million was the second largest in the world after the United States with 5.4 million. 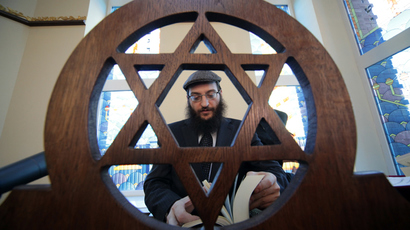 He also stated that he could not agree with the opinion that Jews were guilty of the 1917 Bolshevik Revolution and subsequent hard times experienced by Russia.

“The allegation that all senior Bolsheviks were Jews is just a myth invented in the times of the Civil War. Top Bolsheviks represented various ethnicities, and those of them who were Jews were ethnic Jews, but not really religious people,” Boroda said.

“First of all, these people were citizens with their own political views and beliefs that did not depend on their background.”

In 2015, Boroda praised the religious freedom in Russia in a public speech and warned that Russian Jews would be in serious danger if President Vladimir Putin was ever ousted from power.

He also stated that Putin’s government provides more guaranteed support for Jews than those in Europe and the US, adding that Russian religious institutions are better protected against anti-Semitism, while other countries don’t provide enough security.